Surprisingly, it’s delicious, and tastes nothing like groinal injury. 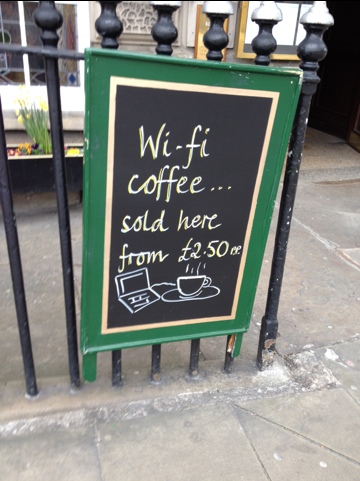 “I can connect to the mocha and the double espresso alright… But the skinny latte keeps rejecting the network key.” 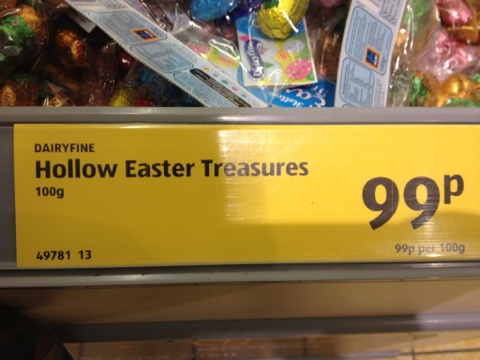 …for the materialistic child?

The label on a box of light bulbs. Almost prophetic. The sheer lack of translation, however, lessens the philosophical blow somewhat 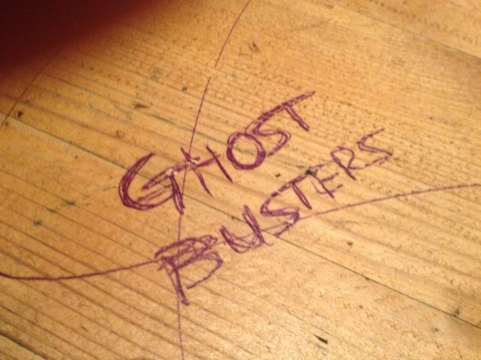 I somehow doubt Dr Spengler drinks in Huddersfield. But if he does, this is what he’d leave behind. 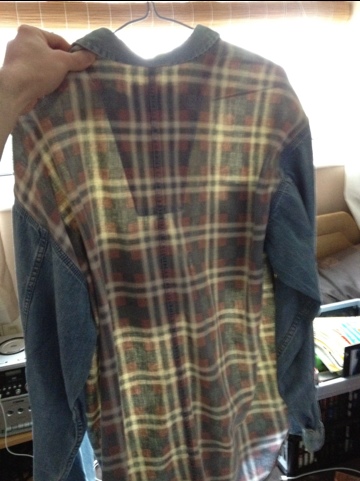 In all honesty, this is less a relic from my childhood and more of an ancient joke. Me and my friends at sixth form (they know who they are) had a habit of trawling charity shops (for all you non-Brits, these are high street junk floggers which submit all of their sales to good causes, which is of course admirable, especially considering some of the crud they shill) for laughs. This was perhaps the biggest. Who would wear this? Vomit yellow to the front, half-hearted plaid to the back? Man or woman? Animal or mineral? More to the point, why have I kept it? I’ve not once strode into the streets of Huddersfield in such subtle attire (honest), not even for fancy dress. I remember trying to flog it on eBay years back as ‘The Worst Piece of Clothing Ever Sewed Together, and, who knew – no bidders.

I think I may hang onto it as a conversation piece. If anything, it adds character. Right? Right?. Right.

Found while clearing junk out of my childhood room. It’s nice to see my stunted sense of humour has survived the decades.

No spoilers.  I’m taking out a new policy on these here reviews from now on – if you don’t wanna be spoiled, HAVE NO FEAR!  Keep reading.  Unless the climax is absolutely detrimental to my recap, I’m not touching them from now on.

Yeah, ok.  The Coen Brothers.  I last came across this pair in January via The Big Lebowski, and suffice to say, I enjoyed myself.  I now have a taste for White Russian, and have started actually using my dressing gown.  The directive Coens seem to be known for quirky, laid-back characters that traipse their way through labyrinths of shaggy dog stories without care or restraint (and I’ll be watching another one of their films, Burn After Reading, later in the year – who knows when?).  And there’s something oddly comforting about that.  Too many of us whittle and worry away about finding a matching pair of socks, while characters like Lebowski’s Dude seem only mildly aggravated that a bounty’s sitting on their heads.  It kinda puts things in perspective.

O Brother is definitely no exception.  It’s a tale of three convicts in depression-era Mississippi who decide to break away from their chain gang in order to go hunting for a revered ‘treasure’ out in the back of beyond.  Along the way, the trio meet a veritable bevy of weird and wonderful kooks, each making their livings and ways in the world while they themselves find distraction, despair, and on at least one occasion, bodily harm.  A striking cast led by George Clooney (I seriously had my doubts on this feller) does well to meander through what’s a real anthology of mishaps and moral stories.

The screenplay is apparently loosely based on Homer’s Odyssey, an ancient Greek epic – and like your average epic poem (guys, I had to scurry through the likes of The Faerie Queene and Paradise Lost for my undergrad studies), O Brother is no less one story, but several.  Characters like guitarist Tommy (who sold his soul to the Devil), bible salesman Big Dan (Coen favourite John Goodman) and even bank robber George ‘Baby Face’ Nelson drift in and out of the motley crew’s adventure, reappearing to finish their tales off as Clooney et al finish theirs.  It’s pretty well put together.  It’s essentially a modern epic; never straying from the story nor the intentions of the main trio, but incorporating enough madcap elements along the way to bth sidetrack them and help keep things interesting.  A similar technique was used in The Blues Brothers – how short would that film have been had they reformed the band and played the concert without all the diversions?  About twenty minutes, that’s how long.

It’s hard not to like the characters- most of them doe-eyed and upfront, and those that aren’t are the antagonists – who don’t really get revealed as being the ‘baddies’ until the very last minute.  Oh, save for the ever-present but shadowy Sherriff, who trails the escapees right to the finish.  This is also a really musical film – very bluesy, very folky – there’s barely a silent moment when people aren’t speaking. This, and the intentional steel-and-sepia colours that paint the film in its entirety, help root the film in the time and locale in which it’s (I guess) pastiching.  It’s all very nice to look at, and jeez that Clooney can sing.  Unless, of course, he was dubbed.  Correct me if that’s the case!

Onto the nitty gritty, then.  This is, again, a really laid-back picture.  The characters aren’t monstrously deep, the stakes are high – but the egos aren’t, and for the most part, it’s pretty funny.  There’s some great lines scattered throughout, but most of the humour comes from its charm and the sheer unflappable will of the main characters.  The main gripe for me comes from the winding down of the film – the climax whimpers out a little bit (AND I’M NOT SPOILING IT!) in comparison with the great, booming, madcap adventures that make up the majority of the preceding flick.  It’s a complete story, with all threads tied off – but I’m just left a little underwhelmed.  Unsure why, but maybe that’s for the best.  This is a film I really don’t want to be too negative about, as it’s so happy.

CONS: The film loses momentum in the last twenty minutes, hitting its climax just before.  The sheer amount of characters and switching focus may annoy some.

SCORE : 7 out of 10.
I’m giving a seven rather than an eight solely for its stumbling momentum towards the end – and it’s not the type of film I’d normally go for whatsoever, but I enjoyed myself.  I’m finding out more and more that I ought to be less cautious in my filmwatching.  Still think I prefer Lebowski, though.  Do you think I mentioned Lebowski enough?  Probably.

Oh, come on.  You’ve all heard of Spinal Tap.  You all know the ‘this goes to eleven’ joke.  You all know the shtick, the false limey accents, blah blah blah blah blah.  I’m guessing you do, anyway.  This film has been a part of comedy film legend for thirty years, one of the unmoveable monoliths (see also Blazing Saddles, Airplane, Animal House).  While not quite the Star Wars of comic film, its reverence precedes itself.  That is, it’s one of many on my list that’s perpetually acclaimed.  Unlike Paul Blart, Spinal Tap is likely to still be hall-of-fame fodder for decades to come.

And why not?  This has to be one of the earliest ‘mockumentary’ (or as Rob Reiner’s character puts it, ‘Rockumentary’) pieces to have been unleashed.  Long ahead of the ‘fly-on-the-wall’ or ‘docusoap’ television staples that would riddle the small screen from the mid-90s onwards, it’s strange to see fiction portrayed as fact so early in time.  The film follows (for anyone still in the dark on what ST is actually about) a touring rock band, the titular Spinal Tap, as they embark on a number of catastrophic gigs, struggle with the release and promotion of their latest album ‘Smell The Glove’, and deal with the quintessential band tiffs, barneys and splits.  It’s got Rob Reiner, the director of the film, playing the director of the fictional documentary.  As confusing as it sounds, this gives it, as mentioned, a fairly unique slant – the characters, the band and the history are all fictional, and are all ridiculous in subtle, but many ways – but we’re being given an insight as if this were an actual documentary.  This style of comedy wouldn’t catch mass wildfire until the late 1990s with the emergence of Ricky Gervais and Stephen Merchant’s TV projects (The Office, Extras, Life’s Too Short), and given how it’s no longer a style of storytelling or joke-pulling that’s unique, this perhaps makes Spinal look a wee bit dated.  Certainly, as mockumentary comedies have increased in number, the bar has naturally been raised.

But, still – this is an extremely funny film.  I can’t deny that.  The jokes derive from the band’s utter insistence on the power of their music and their popularity is undying – whereas in reality, they’re anything but mainstream.  The musicians are all, without exception, delusional in their prowess – they can play, credit due – but they can’t pull the crowds.  Their choosing to play ‘Sex Farm’ at a glorified tea dance is an especially funny moment which ultimately leads to lead guitarist Nigel Tufnel leaving the group, before returning upon the news that the aforementioned song is ‘Number Five in Japan’.  The vast majority of the humour is satirical of the music industry, and obviously of the inner workings of the British rock band.  There’s more than a few Beatles and Stones references in here (the ‘Yoko Ono effect’ getting pastiched rather blatantly), and given the stories you hear about some of these bands across the years, Spinal Tap in some ways comes off as far more satirical than it is ridiculous. The humour is constantly playful, verbally slapstick (if that’s a term, if not, I’ve coined it), and never mean-spirited.  It’s a very ‘sunny’ picture.  You really feel for these guys, and despite their protestations and delusions of grandeur, you somehow want them to succeed – but you don’t mind laughing when things go awry.

Despite all this, it is dated.  I can’t avoid that.  It’s a very, very good film that will survive thirty years without a blemish, however – but the impact this had thirty years ago is not one that survives the folly of time.  The humour is also pretty exclusive – if you have less than a passing interest in, or knowledge of the ‘rock band’ as a genre, you’re unlikely to raise more than a chuckle or so.  It’s whimsical enough to appeal to many people – but its satire is its strongest facet.

CONS: Very dated now.  Humour may be lost on a wider scale.

7/10 – I liked this.  I don’t think it’s something I’d buy on DVD, or would even watch again within the year – but there’s a lot of clever touches, and stylistically, it was incomparable.  Long may it stand as an epoch-maker, as opposed to a world-beater.

10. That really odorous person that always picks the aisle seat next to you
9. The guy with earphones in who raps every third word of the song he’s listening to out loud
8. The guy with three teeth who thinks his dog is interested in hearing stories about cabbages
7. Anyone who hammers the ‘open’ button wildly to get off the train, only to stop and panic when it lights up to let them off
6. The bloke who can’t shut the automatic toilet, so chooses to have a dump with the doors open
5. The nosey sod who hears you finish the end of your conversation, then quizzes you on it as if you’ve known each other years
4. Tipsy ascot enthusiasts dressed up to the nines, and perpetually demanding your attention / offence for their amusement
3. Festival-goers
2. The lad who receives an instant message on his phone every ten seconds, refusing to turn off the constant, hollow sound of discordant bells
1. The pointy-chinned bloke in the grey hat who’s making fun of you on his blog

Any reviews or rants you may read on this blog express MY opinion, and my opinion ONLY. I don't have a monopoly on the truth, nor do I have a monopoly on public opinion. I'm not a deity, people. I earn 12k a year. I WISH I were a deity.